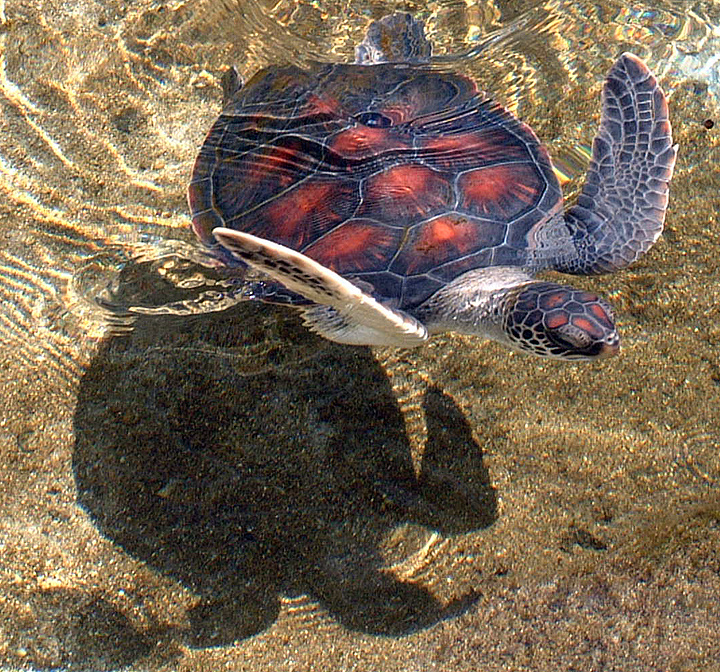 When you travel to Costa Rica, you may hear the green turtle species referred to by one of two names, the Pacific the green turtle and the black sea turtle. Measuring up to four feet and several hundred pounds at adulthood, it is one of the largest of the sea turtle species. Unlike the other species of marine turtles, the green turtle is mostly vegetarian, subsisting mainly on a diet of sea grass. It derives its name from the plant pigmentation it absorbs that gives various parts of its body a greenish hue.

More green turtles inhabit the waters and beaches of Costa Rica’s Caribbean coast than anywhere else in the Western Hemisphere, making Costa Rica tours a perfect time to see the species. Divers who travel to Costa Rica will see them foraging at Cocos Island National Park and nesting in several locations. Nesting every two to five years, the green turtle’s most important nesting sites in Costa Rica are on the Caribbean coast. Visitors on Costa Rica tours may want to include Tortuguero National Park in their itinerary since 20,000 or more green turtle eggs hatch here each year. Nesting season is from July to October, some years a bit earlier and some later. Working from the John H. Phipps Biological Station just north of the park since 1994, volunteers have been tagging and monitoring the turtles under the auspices of the Sea Turtle Conservancy, an organization founded to save the green turtle. Green turtles also nest in Gandoca-Manzanillo National Wildlife Refuge further south on the Caribbean coast near the Panama border.

On the Pacific side, green turtles come to nest in some of the locations where other turtle species do the same. These include Junquillal Bay National Wildlife Refuge in the Santa Elena Gulf near the northwestern border with Nicaragua and nearby coastal Santa Rosa National Park. Between July and September, green turtles nest in Manuel Antonio National Park, a destination on the itinerary of five of Southern Explorations’ Costa Rica tours, ranging from seven days to ten days. Our seven-day Coast to Coast trip visits Tortuguero National Park as well as Manuel Antonio Manuel National Park. 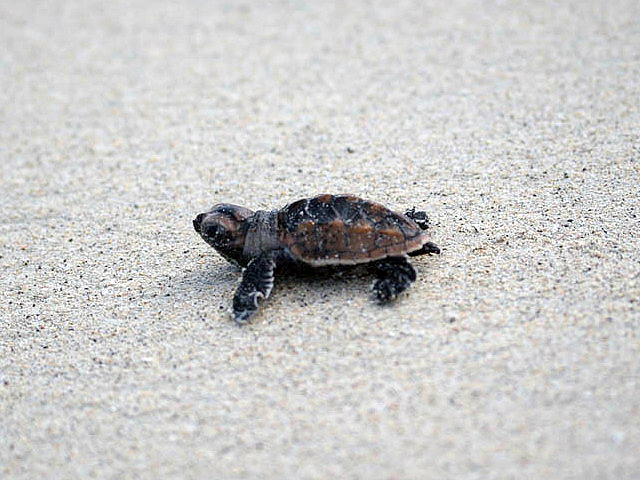 Almost exclusively found in tropical regions, the hawksbill grows to three feet in length and up to 150 pounds, deriving its name from the shape of its beak. Humans are best acquainted with its shell, the body part that makes the species most vulnerable. Its legs and head have a striking mosaic pattern and its carapace is multi-hued brown, orange or yellow, long favored by humans in making decorative tortoiseshell items such as hair adornments. Though the species receives protections under various international agreements as well as national laws in the countries the species inhabits, demand for its shell, along with threats to its habitat keep the hawksbill's status critically endangered most everywhere.

The hawksbill inhabits the coastal waters of Costa Rica where the coral reefs and rocky environments provide their main source of food, sponges. Scuba divers wishing to view the species in its ocean habitat during their Costa Rica tours head to Cocos Island National Park in the seas off the Nicoya Peninsula. The species nests every two to three years, usually three times during the wet season between July and October. Most nesting takes place in August and September. Visitors may have the opportunity to observe hawksbill turtles nesting on both coasts when they travel to Costa Rica. At the northwestern tip of the country, the species nests at Junquillal Bay National Wildlife Refuge in the Santa Elena Gulf and on beaches off the Pacific coast of Santa Rosa National Park. Further east, the species also comes to nest in Marino Bellena National Park from May to November. Two locations where visitors on Costa Rica tours may observe a few hawksbills nesting on the Caribbean coast are Tortuguero National Park, mostly between July and October, and further south in the Gandoca-Manzanillo National Wildlife Refuge.

In 2006, the World Wildlife Fund began a study to determine the effects of climate change on the species. After researching how temperature changes in air, water and sand may alter nesting and feeding habitat, sex ratios and migration patterns of hawksbills, data will be used to design a broader study, encompassing the other marine turtle species. 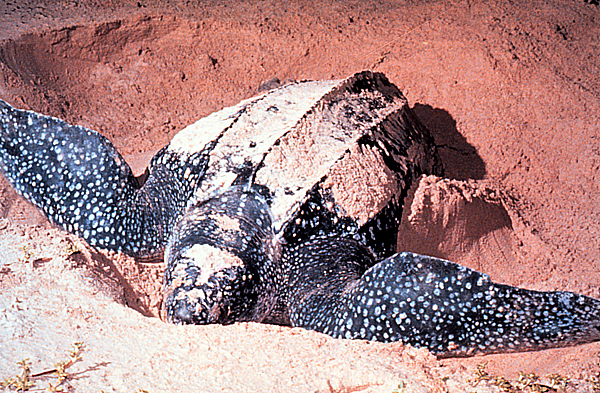 What makes the leatherback such a draw for visitors on Costa Rica tours and elsewhere is its mammoth size. The largest of the marine turtles, the leatherback grows four to six feet in length and weighs between 500 and 1,500 pounds. Watching this slow-moving spectacle and the more action-packed event of seeing the young sprint from the beach to the sea are memorable activities for visitors who travel to Costa Rica.

The critically endangered leatherback turtle spends more time submerged than other of the marine turtles, dives deeper and migrates across oceans, feeding just off shore as well as in open water. In Costa Rica, the species goes by the name of "baula" or "canal." The leatherback derives its name from a leather-like ridged black shell with white dots. The leatherback species lives between thirty and fifty years, longer than any other turtle species.

Leatherbacks have much to fear from humans. Though the leatherback’s shell is not hard and its meat is unappetizing, its eggs still make the slaughter worthwhile. The traditional method that poachers use to harvest the eggs is to slice off the turtle’s very long flippers to prevent escape and then turn the female on her back, leaving her to die a slow death after the eggs have been removed. Leatherbacks may also consume discarded plastic bags, mistaking them for jelly fish, the main leatherback diet. Fishing nets have also taken their toll. This magnificent species has managed to exist for a hundred million years, but is on the verge of extinction today.

To protect the world’s most important leatherback nesting site, the Costa Rican government established Leatherback (Las Baulas) Marine National Park in 1991. Ten years later, the government took more drastic measures, establishing the Cocos-Baulas migratory corridor down its entire Pacific coast to protect the leatherback and other species. Conservationists hope that the corridor will become a regional effort beyond the borders of Costa Rica.

Governments and environmental organizations throughout the world are trying to prevent the leatherback’s extinction. The Sea Turtle Conservancy has been tracking their migration as they nest along the coasts of Costa Rica and Panama since 2003. Laws can only do so much to protect the species. One effective way to save the leatherbacks and other species is to convince communities in the vicinity of nesting sites that saving the turtles is in their best interest. Various environmental organizations, including the World Wildlife Fund, have been educating communities about the benefits of eco-tourism, poaching prevention and the infrastructure improvements necessary to attract more eco-tourists on Costa Rica tours. In northwest Costa Rica, for instance, these efforts resulted in the elimination of leatherback poaching altogether at the Playa Junquillal, an important nesting beach on the Nicoya Peninsula.

In Marino Las Baulas National Park, visitors on Costa Rica tours will be able to watch all of the country’s marine turtle species, though leatherbacks are the star attraction. Playa Grande, Playa Langosta and Playa Ventanas are the beaches where the species nests in the park. Though populations have diminished, hundreds of leatherbacks still come here each year to lay their eggs between October and March. Females deposit eggs every ten days during their nesting season. Nesting may also be seen further north at Santa Rosa National Park.

One of the world’s largest populations of leatherbacks along the Caribbean coast nests at Tortuguero National Park from February to July. Another location to observe leatherbacks nesting is Gandoca-Manzanillo National Wildlife Refuge near the town of Manzanillo from March to July. Visitors on Costa Rica tours may want to schedule their travel in April or May to increase their chances of seeing more leatherbacks in either location.

Some vacationers enjoy the nightlife of loud music and cocktails, but for many visitors on Costa Rica tours, nightlife means crouching in the sand, hoping to observe marine turtles as they lay eggs or to glimpse the hatchlings scrambling to the sea in the darkness of the country’s beaches. In most nesting locations, turtle-watching in Costa Rica is tightly controlled to avoid disturbing the females. It is a waiting game, and the visitors who get to have the experiences during their travel to Costa Rica are truly fortunate.

Once abundant, only seven species of marine turtles remain. Four of these, from the largest to the smallest, travel to Costa Rica to nest every year, the leatherback, the green turtle, the hawksbill and the olive ridley. The turtle species that nest here all do so at night, crawling onto a safe spot on the beach and using their back flippers to dig and cover the hole where they deposit their eggs. The sex of the turtles will be determined after the eggs have been deposited, with warmer sands usually producing females and colder sands, males.

Most national parks in Costa Rica attract one or more turtle species. Two of these parks represent important turtle nesting sites and are the reason the territory was designated as national park land. Several species come to nest at 77,000-acre Tortuguero National Park on the Caribbean coast, including the infrequently observed loggerhead species. The star attraction at Las Boulas Marine National Park on the northwestern Pacific coast is the leatherback species. Turtles are also found in some of the nation’s other protected areas, including Gandoca-Manzanillo National Refuge on the southern Caribbean coast near the border with Panama and Isla del Cano Biological Refuge off the southern Pacific coast near Corcovado National Park.

Established in 2001, the Inter-American Convention for the Protection and Conservation of Sea Turtles (IAC) stands as the world's only far-reaching international agreement to protect these species and their habitat. Though not all have signed the agreement, twenty-eight countries are named in this comprehensive document with stringent provisions. Costa Rica is among the countries that have signed the IAC agreement. To learn more about sea turtles and efforts to protect them before you travel to Costa Rica, go to www.iacseaturtle.org, one of the sources for this article.

“The trip was fabulous and We had a great guide. I was very pleased with every aspect of my trip. I will definitely consider Southern Explorations for future trips. Thanks!”
Daniel Wheeler - VI
Lodge-Based W Trek, Chile
See what other people are saying