info@southernexplorations.com
back to previous page
12/07/2018 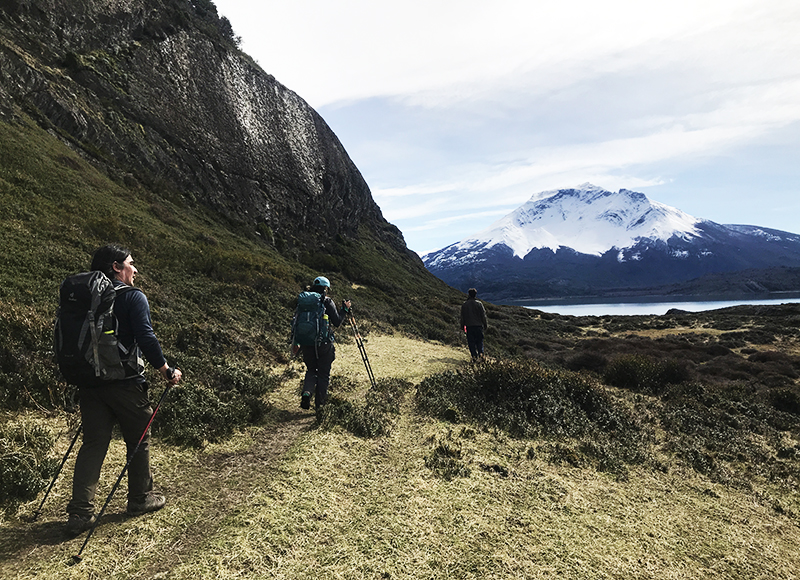 We hope you've been following along on our social media channels as our Sales and Operations Manager Eric deep-dives into Patagonia on his mission to find additional opportunities to explore off-the-beaten path at Torres del Paine in Patagonia.

At home, Eric and the team will wade through his notes, photos, and observations to craft our newest Southern Explorations Patagonia trip. Once we’ve completed our Torres del Paine alternative itinerary we will be sure to share it with you through our newsletter and across all our social media channels.

But before we put our final touches on that trip, a few of you have asked us which Southern Explorations trip Eric was following as we watched him explore Patagonia these past couple weeks. So we decided to share Eric’s running itinerary - with his notes – in case you’d like to experience it for yourself.

Thanks for following Eric along and enjoy!

DISPATCHES FROM ERIC: MY ITINERARY

My first day of the trip was spent in Buenos Aires where I got to try my hand at making Argentina’s most famous street food, the empanada. I learned about the different types of filling, while “fine tuning” my crimping skills. This cookery class is perfect for families and groups of friends.

Day 3: Another day of meetings around Buenos Aires for me. Really useful for trip crafting details, but you’ll probably want to skip taking meetings for your trip and instead enjoy some less formal encounters with the locals.

Day 4: It’s off to Bariloche. After the flight from Buenos Aires into Bariloche, I traveled 50 miles north to Villa la Angostura. This charming city is surrounded by dense forests and snow-capped mountain peaks. Located on the shores of Lake Nahuel Huapi and at the foot of Mt. Bayo , Mt. Icayal and Mt. Belvedere, it’s a popular ski resort in the winter and pretty much a hiker’s paradise in the summer months.

Day 5: Another day in the Bariloche region and after I visited some great hotels I took a drive along the Seven Lakes Road – a scenic trip and a local landmark – which takes you along Route 234 and links some of most beautiful lakes you’ll ever see, like Espejo, Correntoso, Escondido, Falkner, Villarino, Machonico, and then enters the town of San Martin. On the way back we took an alternate route – Paso Cordoba – a fantastic stretch of road that took us all the way to Confluencia, and then from there went into the Valle Encantado to check out the ever-changing volcanic rock formations.

Day 6: Today I travelled up and over the Andes from Argentina into Chile. This storied route has been used for generations by local indigenous groups, early Swiss & German immigrants, and anyone wanting to explore the heart of the Andes. Pretty much enjoyed the ultimate Lake District experience. First I traveled to Puerto Panuelo for a catamaran ride across Lake Nahuel Huapi to Puerto Blest, then took a bus the short distance to Puerto Frias at the Chile Patagonia border through an Andean larch (a type of coniferous tree) forest. The wilderness views through this part of the ride were spectacular. Another short bus ride brought me to the village of Peulla where I had a delicious lunch. Next I was onto a boat along the emerald waters of Todos los Santos Lake to the Petrohue River. Really stunning views of three volcanoes. After reaching the pier, I visited the quaint town of Puerto Varas for a rather relaxing evening to myself.

Day 7 – 8: From Puerto Varas it’s on to Puerto Natales where I scouted Estancia La Peninsula, which is just across Last Hope Sound from Puerto Natales. This is beautiful, remote land and the Estancia owners are developing a tourism program. We’re partnering with them to offer day trips to the Estancia, and working to include on our revamped Torres del Paine National Park trekking itinerary! 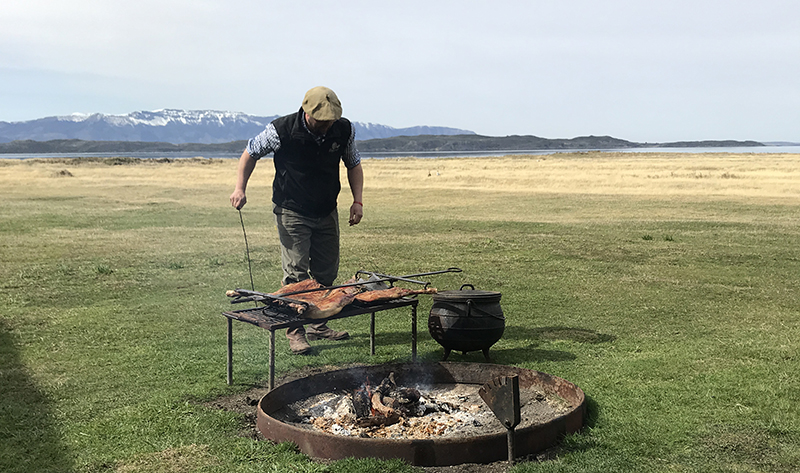 Day 9: After breakfast at Puerto Natales I went for a spectacular drive alongside the turquoise waters of Sarmiento Lake and onto Estancia Lazo for a nice hike through ancient southern beech forests along the shores of Laguna Verde, then through a grassy valley on towards Sierra del Toro. It’s a great introductory hike with fairly flat terrain, soft grassy trails, and mountain and lake views. After a few hours of hiking I reached the Mirador del Toro. The views here are incredible. The landscape is all fast-flowing rivers, snow-capped granite peaks, and iceberg-choked lakes. I spent some time just taking in the view before making my way down the steep descent of this scree slope to the pampas below to have lunch in the valley. After lunch I visited the national park’s headquarters and visitors center to learn more about the park’s history and study the relief maps illustrating the hike to come. From here it was just a short drive to our campsite on the Serrano River. Magnificent views of the Paine Massif. 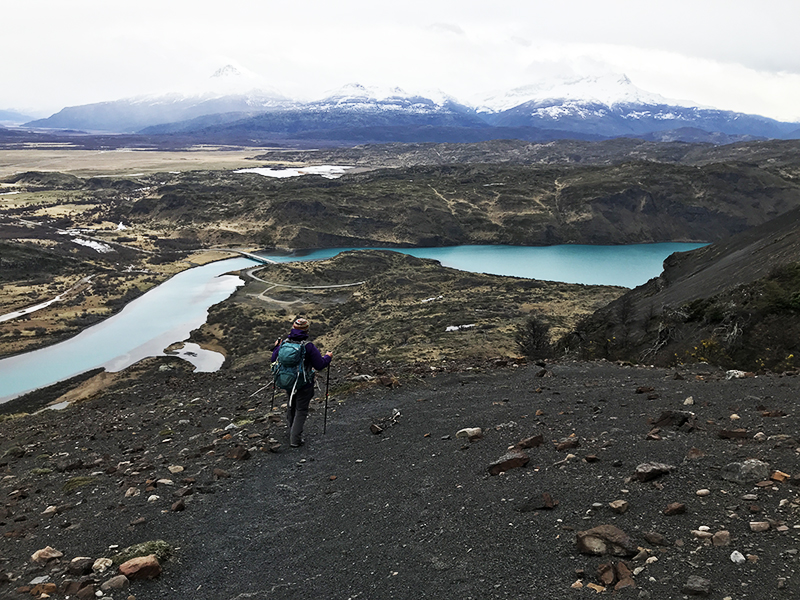 Day 10: Another good breakfast to start the day and then off to Grey Glacier Park Ranger station to begin a demanding ascent. Overtime, Grey Lake revealed itself, as did the enormous ice barrier of the Southern Ice Fields, until I entered a dense forest and then out again to the final point of the exploration, where it is usually quite windy, but with an outstanding view of Grey and Pehoé lakes as well as the entire Paine Grande Massif. Outstanding. No better way to end the hiking portion of the trip.

Day 11: I had an early start this morning for the drive across the pampas to the Punta Arenas airport than on to the capital of Chile. This evening I met with colleagues for a truly exceptional meal at the one-of-a-kind restaurant; Borago.

Day 12: Today I met one of our local guides to explore some of Santiago’s many beautiful parks by bike. We started at Parque Araucano in the gardens and continued downhill on well-kept trails to Parque Americo Vespucio, which connects the Las Condes and Vitacura districts of Santiago. After traveling along Vespucio we arrived at Parque Bicentenario, a 60-acre park on the banks of the Mapocho River. The park’s landscape is a collection of more than 4,000 trees including 1,300 indigenous to Chile. We enjoyed a snack while watching flamingos feed in one of the nearby pools that attract numerous bird species. Fortified for a bit more riding, we tackled the steep hills of San Cristóbal Park, which offered the best panoramic views over the city and of the Andean peaks in the background. We grabbed a refreshing mote con huesillo from a street stall, a traditional Chilean summer drink of peach nectar and wheat, then descended back to our hotel in the Lastarria neighborhood.

Day 13: Before heading out to the airport I took a nice walk through Chile’s National Museum of Fine Arts enjoying the beaux-arts style architecture of the palace, in which the collection is housed, as well as the amazing collection of Chilean and South American art.