info@southernexplorations.com
back to previous page
02/15/2016

Though some may think of deserts as desolate and devoid of interesting sights, to geologists and nature photographers, the Atacama is anything but. Clearly, barren is in the eye of the beholder. During travel to Chile here, it is impossible to view these unique landscapes without saying, “that would make a great shot,” even if you have never picked up a camera. And it isn’t just the renowned flamingo-attracting salt flat lagoons or the geometric patterns of the salt flats themselves near the town of San Pedro de Atacama that fascinate photographers. They are just the beginning. 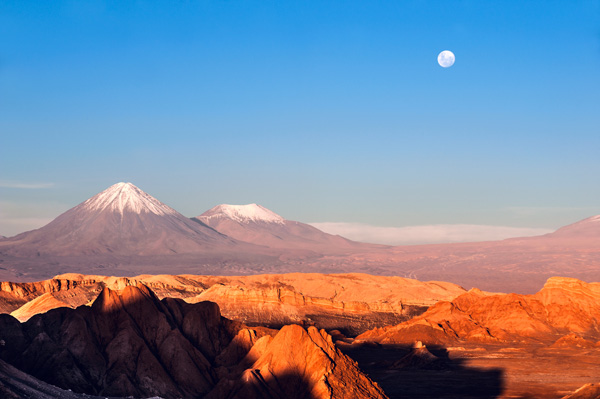 In what may be the oldest of the world’s deserts are many volcanoes, including those of the Cordillera de la Sal (Salt range) that skirts the east side of this oasis village. Named for its abundance of calcium sulfate, the Cordillera de la Sal gets its colorful striations from its mineral content. These colorful peaks make interesting photos, whether taken during the day, at sunset or under a full moon. At 13,800 feet, the starkly picturesque altiplanic lagoons are a destination that many visitors include in their San Pedro de Atacama itinerary. These brackish but beautiful high-elevation waters contrasted against a clear blue sky, with nearby snowcapped volcanoes mirrored in their waters, make for great photos and a memorable experience.

One must-see Atacama site is the Tatio Geyser Field, one of the largest in the world. At 14,000 feet above sea level, the dramatic geysers of El Tatio get visitors up before dawn to view the phenomenon when it is most active. The eruptions are produced by the convergence of groundwater above a lava field, causing huge plumes of steam and gas to expel through the cracks, sometimes exceeding 32 feet. Even amateur photographers will be able to take home ethereal shots from this location during their Chile tours.

The region contains several famous valleys. Five miles south of San Pedro de Atacama lie five square miles of colorful cliffs and flatland comprised of gypsum, clay and salt, named the Valley of the Moon (Valle de la Luna). Here winds have carved bizarre rock shapes that jut out of promontories as though placed there by sculptors. It is a great spot to watch the sun change the colors of the hills as it sets, and after nightfall, see how the moon makes the salinity of the terrain shine. Death Valley, the sun glinting on its hillsides, rows of mountains in the background, is another much-appreciated scene during Chile tours to the Atacama.
Submitted by Michelle on Mon, 02/15/2016 - 10:58pm