info@southernexplorations.com
back to previous page
10/25/2019 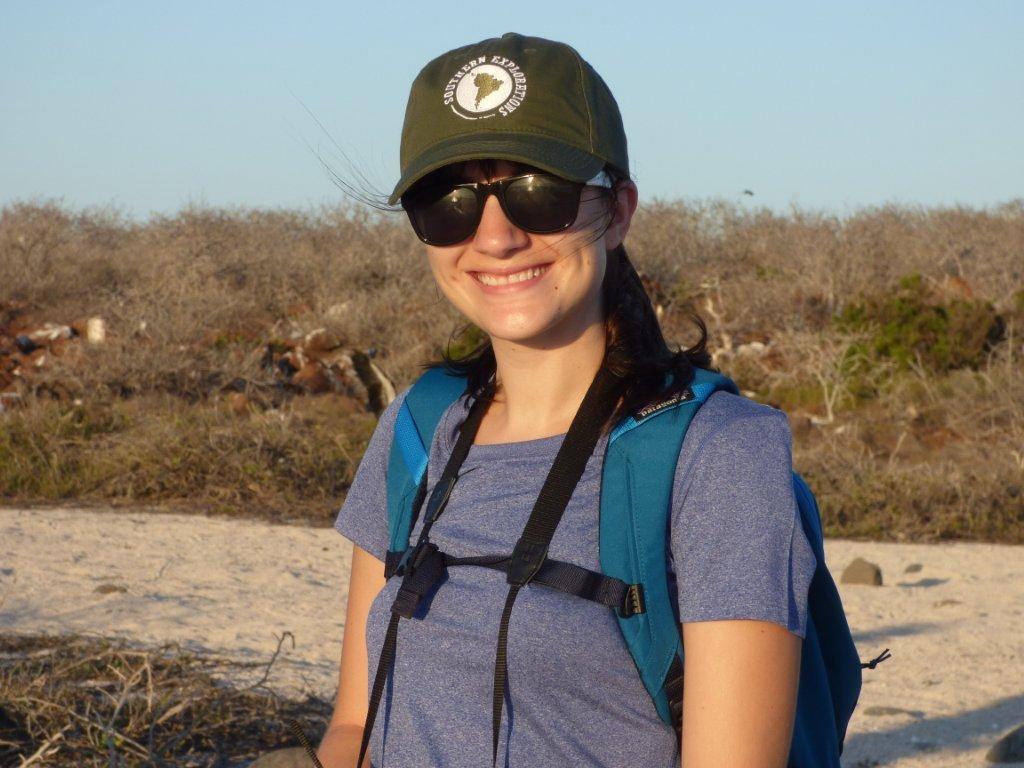 We chatted with Aimee Cosson about her first ever international trip: an eye-opening experience in the Galapagos that her sister, our very own Marisa Edgerton, convinced her she had to take.

Aimee Cosson: No, I hadn’t done much traveling at all. The biggest place I probably went to was Seattle to see my sister when she was living there. So no, I hadn’t traveled very much. But I was in a good place in my life and had more opportunity to travel.

With my sister working for Southern Explorations, Galapagos was the place she told me I had to go. I’ve always really loved nature and being outside and my husband’s the same way, so she thought it made the most sense. We said, “Let’s just do it.” That was November of 2015.

SE: What was your first impression?

AC:  Well we flew into Quito, Ecuador and stayed there for two days. Just that itself, on my first international trip, was amazing.

Quito is up on the hill, I think it’s almost 10,000 feet elevation, and we got in at night. Just immediately, everything was so different. I mean, it was the first time for me being in a country that was so different. That alone was fascinating for me. Quito is amazing. Everything is so old. The buildings are from the 1500s. America is just so young compared to places like that. That was really neat for me, but then, of course, we went to the Galapagos.

It’s interesting, a lot of people I’ve talked to about the Galapagos since my trip have asked, “What’s that? Where’s that?”

Kind of like, “Why go there?” Well, I know they’re just like these tiny little islands, but there’s so much to them!

The first day, when we landed, we had to take a little boat to get to our ship. There must have been less than 80 passengers on our ship. It wasn’t huge. We would take little groups to go on our tours, so it was always very personal and intimate.

That first night we were there, we went on an excursion. It was a beautiful sunset and there were these frigate birds and they were nesting. They were huge with their red throats puffing out and I thought: “Where am I? Everything is so incredible!”

There’s so many different species on every island and some of the same species, like the finch, will look differently from island to island since they all evolved island to island. To me, that was mind-boggling!

Every island is so different. The islands to the west are bigger and they have the volcanoes. Then you have the islands to the east, which are smaller because they are sinking. The landscapes are completely different. You know in your head you’re on the Galapagos, but it’s like you’re stepping into a different world every time you get onto an island with the wildlife all adapting in different ways to each island.

You’ve got tortoises with longer necks on one so they can reach up and eat the leaves. Then you’ve got other ones that don’t need to do that because they’ve got food on the ground. It’s amazing to see all the evolution right in your face! And the animals are so well protected and it’s their world.

There’s so much development in our world and we’re tearing down and ruining animals’ habitats, so it’s really nice to see a place where they live and it’s their place and you can only walk in certain places because the rest of the space is theirs.

SE: What kind of effect did that have on you?

AC: I’ve always thought of myself as someone who enjoys nature, you know? But going there really changed my perspective and made me appreciate things more. It made me reflect on how we are always on the go and taking things so fast. We’re not always able to enjoy things, but we need to take more time because we’re on this amazing planet and there’s these astonishing animals and incredible places you can visit.

I mean one island was all rocks and very little greenery, but there’s the beautiful Nazca boobies, dozens of them, right next to me and I’m just sitting there with the ocean right there, there’s these amazing rock cliffs, and you can’t help but think: “This is actually amazing. This is the stuff that matters!”

Not work stuff and fashion choices, like what boots am I going to wear, you know? The petty things in life that people get their heads wrapped up in.

I know some people just don’t get that, but it really brought me back to what mattered. Being grateful to be alive and being able to experience these amazing animals and environments. I mean there’s flamingos and there’s penguins! Where else are you going to see all those different animals together?

And as I understand it from my sister, every time you go, you see something different. We saw the hybrid iguana, which is from when a marine iguana and a land iguana mated, and it’s super rare. It’s just another occurrence on the islands that makes you think: how did that happen?

It’s fascinating! All these animals just doing their own thing and figuring out life, what they need to eat, and adapting to their environment.

SE: Do you still talk to people about the trip today?

AC: Sometimes people try to ask me about the trip and I often don’t even have the words because it was just so fascinating. It really opened my eyes up. It made me appreciate nature so much more. We’re putting so many bad things into this world, into the water and into the ground. We’re destroying these animals’ homes. It made me more grateful, I guess? I’m not really sure how to describe it because it’s so incredible.

SE: Do you still think about it much?

AC: I still think about it all the time, even though it’s been four years! I’d love to go back someday, but it’s also one of those places that can be a once-in-a-lifetime trip that you can do.

SE: Did your trip to the Galapagos inspire you to travel more?

AC: It really did. After that, we went to Costa Rica with Southern Explorations. That was its own thing and amazing, of course. I mean Costa Rica is a wonderful country. The people are so nice and we kind of did a bit of everything.

And having already been to the Galapagos, I think it made me enjoy Costa Rica because here I was, in another amazing place, that’s somehow totally different, with totally different animals and experiences. It’s kind of mind blowing!

And I can’t wait to do our next trip with Southern Explorations. We’re probably going to do Chile or something like that, which isn’t quite so wildlife centered, but instead it’s these beautiful landscapes and food and people.

SE: So would you say your trip changed you?

AC: Oh for sure! I think every time you travel you learn something new or get a new perspective. I gained a new love and appreciation for life and the planet we live on.

“I chose Southern Explorations for the combination of interesting itineraries and your high rating on customer satisfaction. I made the right choice. I will gladly recommend you to others.”
Pat Harding - TX
Custom Iguazu, Lakes District, Mendoza and Santiago
See what other people are saying