info@southernexplorations.com
back to previous page
12/19/2019

Archaeologists have discovered 143 new Nazca Lines etched into the desert plain some 250 miles southeast of Lima, Peru. The series of massive geoglyphs were identified by researchers at Japan’s Yamagata University through a combination of on-the-ground fieldwork and data analysis.

According to a statement from Yamagata University, the research was led by Professor Masato Sakai and carried out in collaboration with IBM, as researchers taught an AI system named Watson to find geoglyphs previously overlooked by human researchers. This marked the first instance of an AI program ever doing this kind of work. The New York Times reports that the researchers taught the AI to search for the new geoglyphs by using images of previously identified lines.

Science News’ Maria Temming noted that while Watson identified more than 500 possible new geoglyphs in the five-kilometer stretch of terrain, according to the statement from Yamagata University, the AI only found “several possible” biomorphic (that is to say, figures drawn to look like living organisms) geoglyphs.

On the ground research during the 2019 field season confirmed the AI’s discovery of a previously unknown “humanoid” figure measuring around 13 feet tall and 6.5 feet wide. The faint “humanoid” figure now joins the more than 2,000 already identified Nazca lines, which depict everything from animals, to plants, to fantastical beings, and geometric patterns.

Professor Sakai and his team have been studying the Nazca Lines since 2004, initially analyzing the area largely through satellite imagery. In 2010, the team began spending time on the ground in Peru to study the mysterious markings more closely.

First discovered in the 1940s, Peru’s Nazca Lines, which took spot #10 on our Top 10 Destinations in Peru list, cover a nearly 200-square-mile area in the arid Peruvian coastal plain and were designated a World Heritage Site by UNESCO in 1994. While much remains unknown about the gigantic ground etchings, researchers do know that the Nazca Lines were an important cultural activity as, for approximately 2,000 years, the ancient people living in the region continued to scratch the miles-long figures into the surface of the ground. They are believed to have had ritual astronomical functions.

In addition to successfully identifying the geoglyphs, Professor Sakai and his teams have carried out activities to preserve the heritage site. However, there is still much work needed to be done in surveying the distribution of these geoglyphs. In addition, the expansion of urban areas has brought damage to the lines, drawing attention to the protection of the Nazca Lines as a social issue.

You can take your first step to discovering the Nazca Lines for yourself when you plan your Peru trip. Our expert team recommends that you climb the nearby foothills to get a better view of the Nazca Lines from an elevated location, or better yet, fly over them for the best possible view. Our three-day Peru Ica/Nazca & Ballestas Islands tour extension includes an observational flight that pairs nicely with a visit to one of Peru’s leading coastal wildlife sanctuaries.
Submitted by Zach on Thu, 12/19/2019 - 11:35am 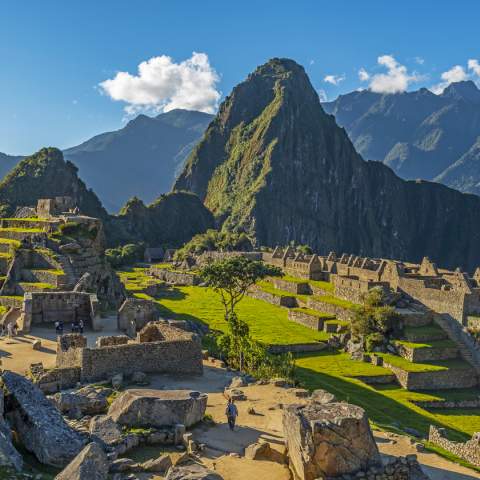