info@southernexplorations.com
back to previous page
02/25/2016
Southern Explorations Antarctica expert Carrie Beck visited the White Continent this past November 2015. Here she recounts the incredible experience of backcountry snowboarding in the most remote place on earth.

I stood on the deck of the Akademik Ioffe, a small ship dedicated to tourism and research in the polar regions, watching a crane lower a zodiac from the ship toward the icy water. Inside the zodiac was our driver, along with an enormous bag of our equipment--ski and snowboard boots, ski poles, ice axes, etc, as well as a couple bundles of skis and snowboards lashed together with nylon straps. I was all "rugged up" as our British expedition leader would say, and felt a bit like the Michelin Man with a transceiver under my jacket and a climbing harness squeezed over my snowboard pants.

I was participating in the “Antarctica Off the Beaten Track” itinerary onboard the Akademik Ioffe, the perfect program for those who want to be active during their trip to the Seventh Continent. Activities offered are backcountry skiing, snowshoeing, kayaking, camping, and expedition photography. There is also the rare opportunity to go on an overnight kayaking exploration, spending one or two nights far from the ship and zodiacs.

Once in the water, our zodiac driver brought the small inflatable boat around to the gangway, and the guide standing near us on deck called out for the skiers to board. As usual, the six of us (four skiers and two snowboarders) and our two Kiwi guides were allowed to cut in front of the rest of the passengers and head to shore first. After descending the steep metal gangway we sat on the inflatable sides of zodiac and sped towards shore through rough waters. I was happy to be wearing full Gore-Tex, as icy water splashed up and soaked my back. At one point I was talking to the guy next to me when saltwater sprayed me full in the face causing me to quickly shut my mouth.

On the way to shore, the scenery was breathtaking--iridescent blue icebergs the size of city buildings with intricate designs carved by the water, towering craggy mountains, and glaciers everywhere. After a tricky landing that involved our zodiac acting as a mini icebreaker, we scrambled ashore, wading through the water in our rubber boots to climb up onto the mass of ice. The crazy thing about Antarctica is when you step on land, you are virtually always on a glacier. The whole continent is a glacier. We quickly worked together to unload our gear, change boots, and get skins on our skis and snowboards. I was on a splitboard, specially designed for backcountry snowboarding. For the climb uphill you split the snowboard in half, turning it into skis and affixing skins for traction; then at the top you remove the skins and put the two pieces back together to once again form a snowboard before descending.

It snowed non-stop the first few days we were at the Antarctic Peninsula and visibility was so poor during our initial excursions that you had to keep the person in front of you in sight at all times. Aside from the occasional rock there is nothing to contrast with the ubiquitous glaring white, so it is easy to get lost in the blank landscape of a storm. Today it had cleared up and was absolutely sparkling with bluebird skies and plenty of fresh snow. The next day the snow would turn to crust from melting and refreezing, but now it was perfect hero snow, unusual for Antarctica where conditions can be wind-scoured and variable. Our guides have led ski trips to the White Continent for years and said these were truly exceptional conditions.

Initially we headed through a Gentoo penguin colony, threading our way amongst the waddling, comical throng of birds, careful not to get too close and disturb them. We skinned up single file keeping eight meters between each person so if one of us tumbled into a crevasse, the rest wouldn't be dragged down, too (although our guides were so knowledgeable and careful, I never felt like this was a real danger). A few days into the trip when I knew everyone better I asked, "Is this is a good time to admit that as an American, I'm not really sure what eight meters means?" We kept a slow, steady pace and I began to wish I always had guides to pace me while skinning. We went more slowly than I normally would have, but I felt much better and my endurance was greatly improved. Around us all you could see was miles and miles of untouched snow, punctuated by the azure of the sea below. At one point, we witnessed an iceberg the length of a football field flipping over, and watched from far above as it caused a veritable tidal wave in all directions.

After skinning up about 3500 feet, we enjoyed 360 degree views from the top and relaxed for a while before the best part: the ride down. Antarctica brings new meaning to the term "fresh tracks". Only after I returned home and went to a ski resort again did I fully appreciate being only one of eight skiers/snowboarders with fresh snow all around. No crowded parking lot. No lift lines. No dodging other skiers and riders on the way down. No trees. No rocks. No moguls. My splitboard was perfectly suited to the conditions, and I surfed over the snow. It was freedom, and my elation often bubbled over into laughter as I carved huge turns. 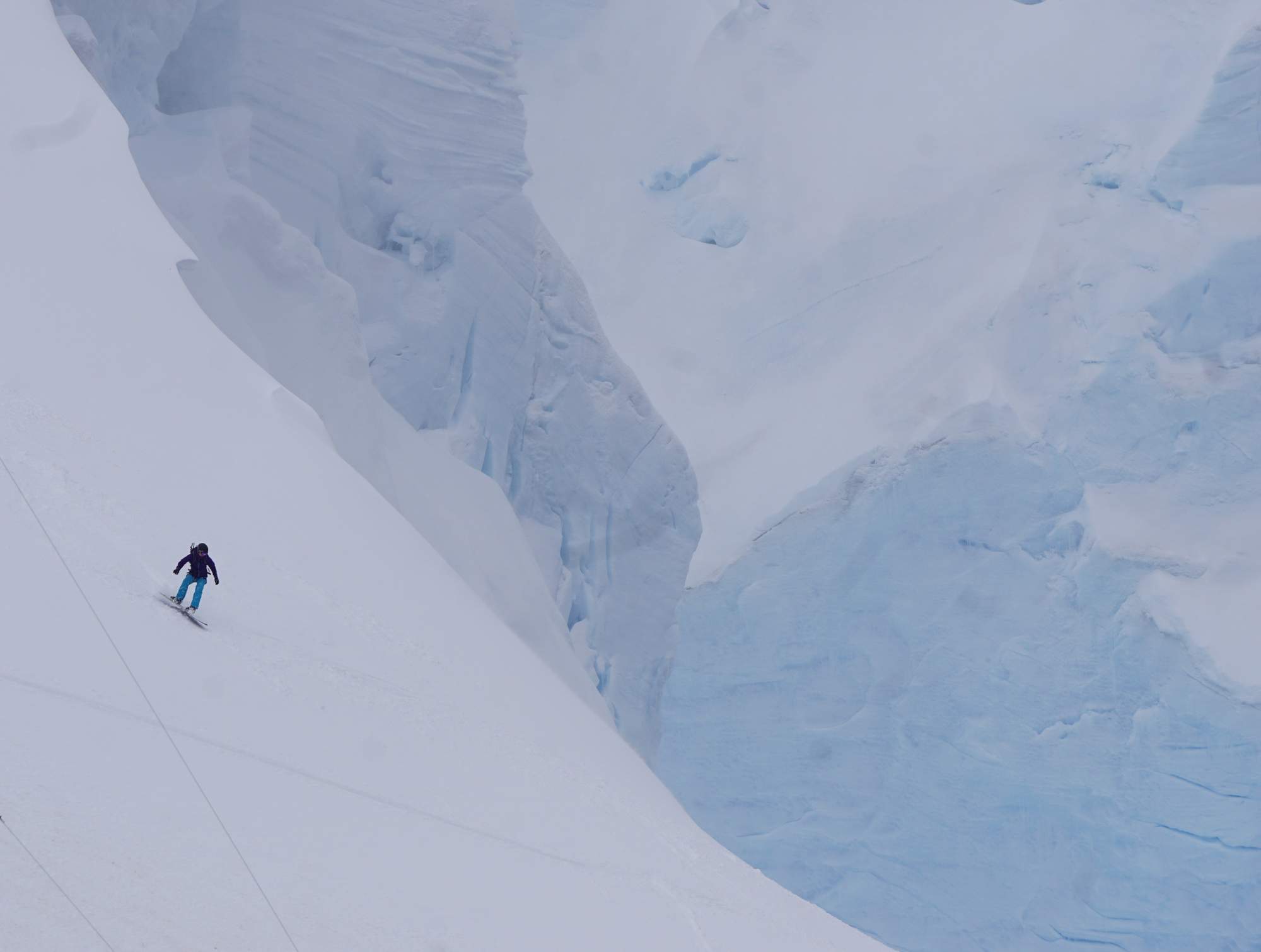 We lapped the top part of the slope a couple times, sweating in the intense heat of the Antarctic sun on the ascent. Even though my face was fully slathered with SPF 30 sunblock, later on my lips swelled up as if I'd had botox treatments. Finally we rode all the way down to the bottom slashing a last turn at water’s edge, surrounded by the odiferous, noisy penguin colony. Here we packed up our gear and waited for the zodiac to retrieve us. Gazing back at our distinct tracks winding down the mountainside, grins broke out on our faces. Were we really here? Did that really just happen?

After returning home it took more than a month to overcome my post-trip withdrawal. To truly be that far off the beaten track is surreal, and no matter how many Antarctica videos you watch or photos you see, it is difficult to fully appreciate Antarctica’s grandeur and power until you experience it for yourself. It is everything you see--penguins curiously approaching as you crouch down to take photos, looking out over the blue iceberg-dotted sea--but it is also the feeling of being utterly alone in an untouched landscape with only your ship in the distance for company. For me the experience was pure joy incarnate, a lifelong dream come true. Now I am trying to figure out how I can get back to Antarctica. As soon as possible. 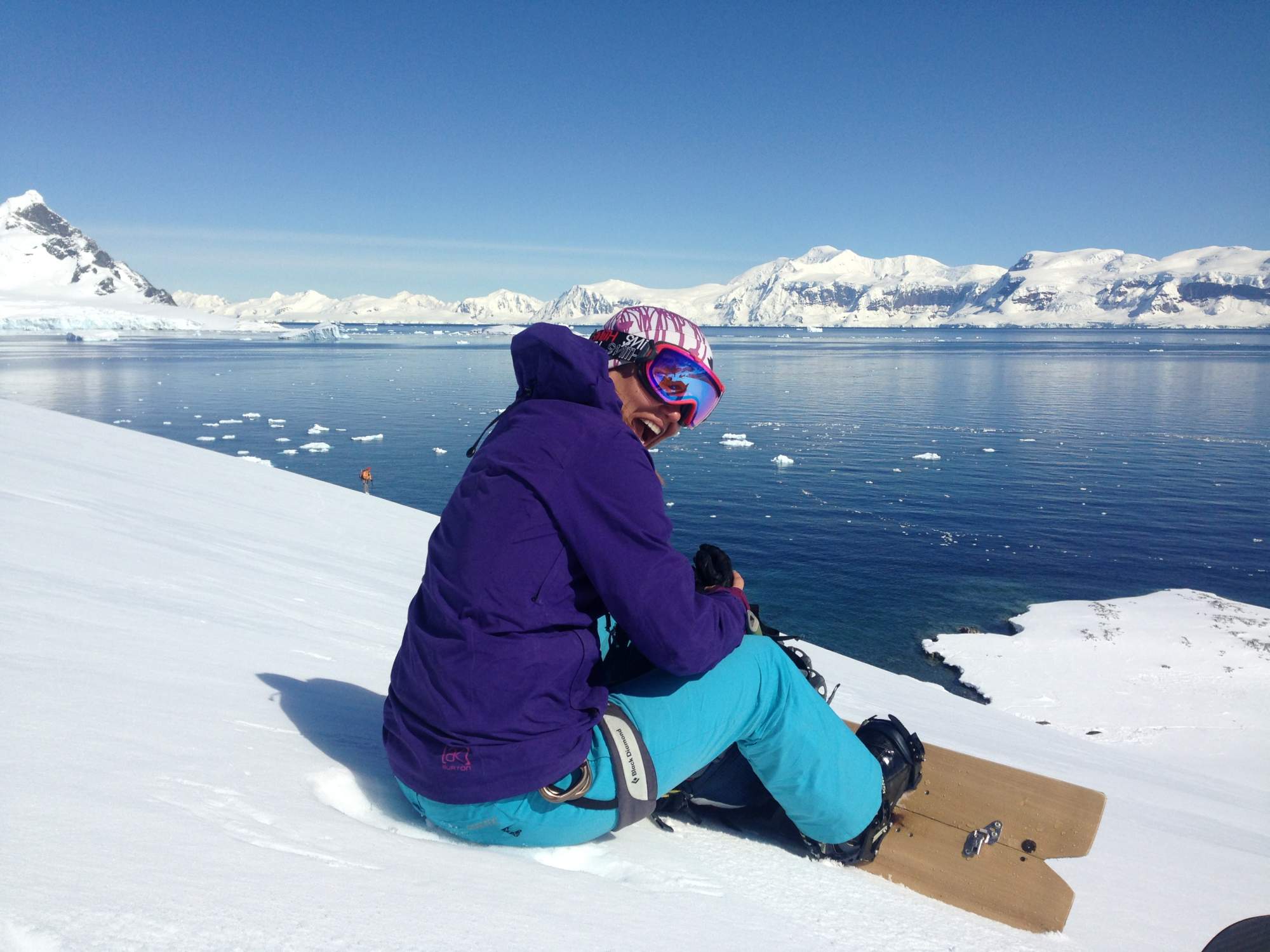