info@southernexplorations.com
back to previous page
01/13/2023 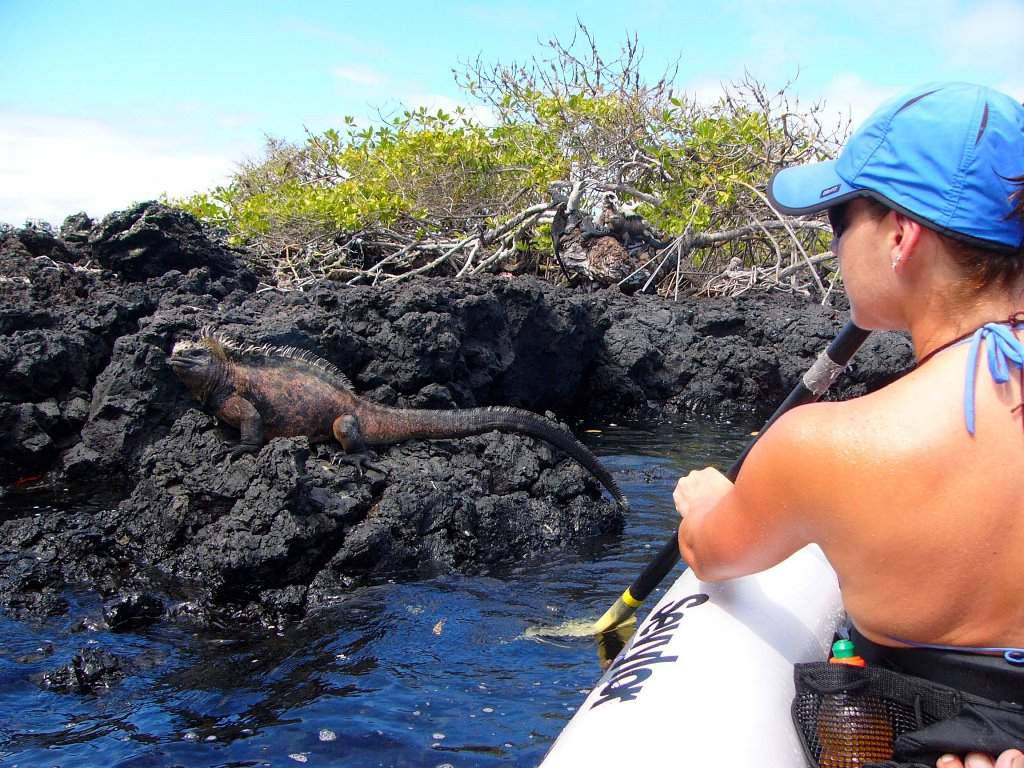 The Galapagos Islands gained international fame after a visit from Charles Darwin in 1835, when the scientist discovered many species found nowhere else on earth, and many others that had adapted specifically to the island environment they called home. Darwin’s theories of evolution are supported by many of the species that are found here, due to the differences in the species that vary from island to island to make them better adapted to survival and finding food.

The draw to the area is not entirely scientific, however. The islands are full of unique, beautiful wildlife and sea life that makes the protected area a must-see destination for wildlife lovers. There are many animals to see in the Galapagos, but here are the top 11 wildlife sightings in the Galapagos that we suggest you keep your eyes out for.

These giants are a prehistoric reminder of the long Galapagos history. Found in only one other location on earth, the Galapagos tortoise can live to be more than 100 years old and can weigh up to 550 pounds. There are many sub species of the tortoise that live on the islands, with variations in their shell shape and size to best adapt them to the specific island within the archipelago where they’re found. Work is being done to increase their numbers, which have diminished due to human harvesting in the past by whalers and buccaneers, who killed them for their meat, oil and shells. Once they’ve reached maturity, these slow-moving giants have no other known predator.
There are three types of boobies found in the Galapagos Islands, each with distinctive characteristics. Red footed boobies are the smallest bird of the booby family. Their plumage coloring varies, but they’re always distinguishable by their bright red feet. These semi-nocturnal birds nest and perch in trees and are more graceful compared to their booby cousins.  Red footed boobies are only found on Genovesa Island and at Punta Pitt located on the eastern side of San Cristobal Island. Booby derives from the Spanish word bobo, meaning fool or clown.  While blue footed boobies are most known for their brightly colored feet, it is this species that is most clown-like. During their courtship dance, each blue foot is lifted slowly, one at a time just like a clown wearing enormous shoes.  Then, the pair points their tail and beak toward the sky and whistles while half opening their wings.  Blue footed boobies fish inshore, often in large numbers, diving down at a school of fish from heights of up to 50 feet and plunging into the water like an arrow.  It’s no wonder this is an exciting species to witness! Nazca boobies are the largest of the three species and nest on the ground like its blue footed cousin. Nazca boobies always lay two eggs but will only rear one chick. The larger, stronger chick slowly pushes the smaller one out of the nest adding further evidence to the theory of natural selection. Nazca boobies are bright white, with a black tail and black wing tips and fish further offshore.
There are 13 species of finch in the Galapagos, collectively known as “Darwin’s Finches”.  These birds originated from a common ancestor (backed up by DNA testing) and are noteworthy for their different beak shapes and sizes which have evolved over time based on the island they inhabit and what food sources are available there. Perhaps most noteworthy is the Vampire Ground Finch (Geospiza septentrionalis), which is only found on Wolf and Darwin Islands in the northernmost part of the archipelago. Vampire finches resort to drinking blood of the Nazca boobies during the seasons when their normal food (seeds, insects and nectar) is harder to find. Lucky cruise passengers who book dive trips may have the chance to witness this!
These marine reptiles are the only sea faring reptile on the planet. Living in colonies on rocky shorelines and surviving primarily on algae, they dive to depths of up to 30 feet into the sea in search of food or take advantage of easy algae access on the rocks during low tide. To compensate this high salt diet, they “spit” brine out through their nostrils. The largest males can grow to over 3 feet long and are found on Isabela Island, where the water is coldest and food is most abundant.  These incredible lizards are found all over the Galapagos Islands.
There are several species of sharks you may see as you snorkel in the Galapagos, none of which are aggressive towards humans. These include the Galapagos shark, the black tip reef shark, the white tip reef shark and hammer heads. The Galapagos shark is found in the reefs in the shallow waters off many islands. It hunts in a group and can reach up to about 10 feet long.

The only member of its genus, the whitetip reef shark maxes out at a little more than 5 feet in length. It has a slender body and short, broad head. It’s mostly nocturnal, choosing to rest in caves or along the bottom of the ocean during the day. It is rarely aggressive toward humans, but will come investigate one if spotted.

The blacktip reef shark is easily spotted, due to the black tips on the end of its fins and tail. They stay in the same area for many years at a time, and are timid and skittish, although you’re likely to see them swimming in the lights at night in Academy Bay in Puerto Ayora if you stand on the passenger pier.

The scalloped hammerhead shark is the most common of all hammerhead sharks. During the day, you’re more likely to see them close to shore; at night, they wander further offshore to hunt. They usually travel in schools and are not considered dangerous to humans. Divers around the world have gone to the Wolf and Darwin Islands to swim with the huge schools of hammer head sharks found there.
There are several types of crabs you’re likely to see on your trip to the Galapagos. Ghost Crab is a semiterrestrial shore crab found throughout the world in addition to this area. They’re named for their nocturnal tendencies, their whitish coloring and how they disappear in an instant when they see a threat. They create deep burrows in the intertidal zone, and are notable because they have elongated eyestalks and one pincher is markedly larger than the other. If you stand still near them long enough, you can watch them roll balls of sand out of their holes.
The Sally Lightfoot Crab is often seen in large numbers along rocky shorelines. They are scavengers and predators; adults feed on other crabs, including their own species! In the Galapagos, these ubiquitous crabs and easy to see because of their vibrant shades of red and blue, thus making them very popular with photographers.
This star fish comes in a variety of colors but is identifiable by a single row of black spines or horns along its legs. Their coloring varies from shades of red to brown to tan; combined with the black bumps, they can resemble a lumpy, star-shaped chocolate chip cookie. You can find them in shallow waters along the Galapagos Island shores.
The Galapagos Hawk is found in most areas on the Galapagos Islands, but nowhere else outside of the archipelago. Their size can vary depending on their habitat, although in general they’re more robust than similar mainland species, such as the red-tailed hawk. Generally, a sooty, mottled brownish black color, this hawk has a silvery gray tail on top with about 10 narrow black bars. The wing feathers are barred with white. They live on mostly insects – locusts and giant centipedes – as well as lizards, snakes, rodents and marine iguanas.
Found in the Galapagos and off the coast of Peru, the Red Lipped Batfish (or Galapagos Batfish) can be seen at depths ranging from 10 to 250 feet. They’re identifiable by their bright red lips, and how they use their pectoral fins to “walk” across the ocean floor.
The only species of cormorant in the world that cannot fly, this uniquely adapted bird is endemic to the Galapagos islands. The bird is majestic underwater and fun to snorkel with, if you happen to see one out searching for food – fish, small octopus or other sea life. Afterward, it sits on the shore to flap its tiny wings to dry them – its feathers are not waterproof. This species, an obvious indicator of evolution, is only found on Fernandina and the northern and western part of Isabela.
Spending most of the year on the Peruvian and Ecuadorian coasts, the Waved Albatross – also called the Galapagos Albatross – flies hundreds of miles to breed on Española Island.  Like the blue footed booby, the waved albatross has an incredible an elaborate courtship. Arriving in April, these incredible birds mate for life and lay one single egg. They have a 7- to 8-foot wingspan and are graceful, beautiful flyers with a wave-like pattern on their feathers that gives them their name. However, their young don’t share their beauty – their feathers look more like hair plugs than anything else!
Submitted by Eric on Fri, 01/13/2023 - 4:17pm

“I can safely speak for my friends when I say thank you. This was the trip of a lifetime, executed to as near perfection as possible. You definitely earned your spot in the National Geographic article. I would easily recommend this trip to anyone considering an extensive tour of Peru, and I would recommend this company for other tours. The price was very much reasonable for the amount of sights and experiences we witnessed.”
Chuck Coatsworth - PA
Discover Peru trip
See what other people are saying