Ecuador - Home To Some of the World's Best Chocolate 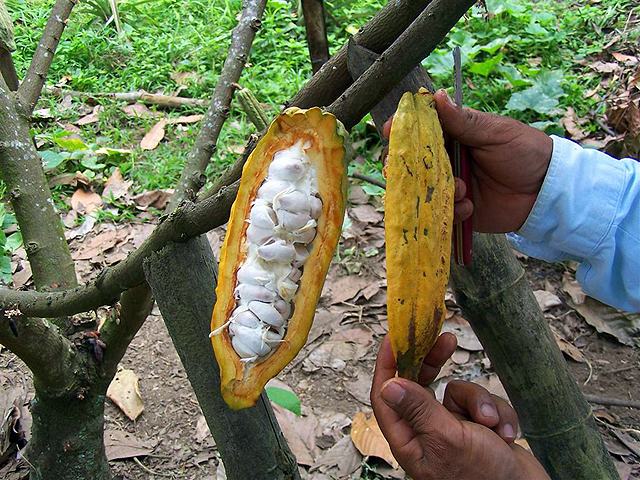 The Dutch van Houten family made a name for itself in the chocolate world through father and son inventions. In 1828, the company received a patent for its hydraulic cacao press that was capable of exerting so much force it could squeeze the fat out the beans after roasting them. This inexpensive device allowed the beans to be ground into a powder that could be mixed with other ingredients, that eventually included powdered and then whole milk. Son, Conrad, made another discovery that moved the cause of solid chocolate forward. By adding alkaline salts to the cocoa powder, a process that came to be known as “Dutching,” chocolate could be made to taste milder and become darker in color, a process that is still widely used in chocolate-making today. By reducing the acidity of the chocolate, Dutching reduces the beneficial flavonol compounds in the beans, but back in the 19th century, chocolate lovers were thinking about flavor, not anti-oxidants.

Many of the most widely known chocolate bar manufacturers date back to the 1800s. After over half a century in the business, the Cadbury Company introduced the first dairy milk chocolate bar, a 1904 innovation that took the western world by storm. When names such as Nestle and Hershey entered the business, the race for the world’s sweet tooth was on. Ecuador was one of the major beneficiaries of the chocolate bar craze, becoming a worldwide exporter of cacao beans.

All who travel to Ecuador will be able to sample premiere chocolate in what remains today one of the world’s top cacao-producing nations. Visitors whose Ecuador tours take them to Guayaquil on their way to a Galapagos Islands cruise will be on the edge of the country’s most important cacao growing region that lies north of the city, and those on Ecuador Amazon tours will be able to see cacao trees growing in the wild. If you are considering travel to Ecuador, see the many trips we offer to visit the Galapagos Islands, the Pacific coast, the remote Ecuador Amazon and hiking and craft markets tours in the Ecuador Andes.

Concern is growing that the desire for more predictable and profitable yields will result in the destruction of habitat and the degradation of the quality of Ecuador’s cacao in the long run. To address the problem, environmental organizations are working with government and industry to promote sustainable practices that will provide farmers the incentive to continue growing shade-grown native varieties instead of turning to hybrids.

The World Cocoa Foundation, a member-based organization comprised of the world’s major chocolate producers, partners with governments to promote sustainability. Some of the major chocolate companies such as Cadbury undertake their own efforts to help the cacao-producing countries improve the lives of cacao growers and implement benign cacao disease-control programs. Scientists are experimenting with the concept of establishing cacao plantations as buffer zones around forests, for the mutual benefit of the plantation and the habitat. The cacao sustainability movement has opened up new eco-tourism destinations to show visitors on Ecuador tours how cacao is grown and processed.

To prevent the destruction of the Amazon Rainforest, environmental organizations help the farmers to make cacao harvesting more profitable. The Rainforest Alliance and the Quito-based environmental organization, Conservacion y Desarrallo (CyD), have brought the farmers the necessary expertise to help implement sustainable practices that also increase their yield. It has organized the farmers into cooperatives so that they can sell their beans collectively without middlemen and share the costs of processing facilities.

Without the means to purchase mechanical dryers, many farmers are forced to sell their beans before drying them at a lower price than farmers who sell them dried. CyD supported the development of an inexpensive solar-powered dryer to enable the farmers to dry beans even in inclement weather conditions. As a result of this and other modifications in agricultural practices, yield and prices have increased. The organization has replicated its programs throughout Ecuador’s cacao growing regions.

Visitors who travel to Ecuador with Southern Explorations may choose from among several different Ecuador tours to the Amazon. Three of these Ecuador tours visit the environs of Yasuni National Park where cacao grows, the four to five-day Napo Wildlife Center or La Selva Jungle Lodge trip and the eight-day Amazon Kayaking Adventure.
Submitted by Michelle on Mon, 03/02/2015 - 10:13am