info@southernexplorations.com
Home  »  Costa Rica
Plan the trip of a lifetime to Costa Rica with our well-traveled team of experts. Work closely with your Southern Explorations' travel specialist to build a first class tailor-made tour over the dates of your choice. As the planet’s leading conservation nation, Costa Rica is a paradise for nature lovers and adventurers alike. Squeezing 5% of the planets total biodiversity into just 0.1% of the planet’s total land mass means Costa Rica’s first-rate wildlife refuges, rafting excursions, surfing hot spots and copious hiking trails always deliver on discovery.

No country conserves more of its territory than Costa Rica where half of the land is forested and almost a quarter is protected by national park or ecological reserve. It’s a place you can be content without venturing beyond the shoreline. From wildlife refuges to surfing, Costa Rica’s varied Pacific and Caribbean coasts offer more than enough to do, or as little as you want. Be warm, be happy.

Costa Rica will make a bird watcher out of you if you aren’t one already. Among its 850 recorded bird species are the aptly-named resplendent quetzal, considered the world’s most beautiful bird, the brilliant scarlet macaw and the violet sabrewing. Visitors may also get to observe humpback whales that travel to Costa Rica from both poles to breed and give birth; a destination also favored by four species of marine turtles. Costa Rica is the forest home of all four New World monkey species whose prehensile tails allow them to swing from branch to branch. You may hear the mantled howlers, observe troops of spider monkeys or white-faced Capuchins, and with luck, encounter some tiny squirrel monkeys. Over 400 orchid species alone grow in bio-diverse Costa Rica. Here, you’ll find national parks, border to border in every blissful region, protecting the country’s endangered species, coral reefs, estuaries and rainforests. Eight are located on its two coasts, eight are within sixty miles of San Jose, the capital, and nine are located in the northern Guanacaste region. This is a country with a tradition of stringent environmental regulations and lofty goals. The government has held out against pressures to develop its considerable oil reserves off its coast, and in 2008 set the goal of becoming carbon-neutral by 2021. Costa Rica’s entire coastline is held in the public domain.

Adventure travelers hike the highlands, whitewater raft Costa Rica’s scenic rivers, and surf, snorkel and dive in two oceans. Of Costa Rica’s 100 volcanoes, Arenal is the most famous and the most active. Hikes here come with extraordinary views and a therapeutic soak afterwards in the several scenic hot springs of the Tabacon River. The bridges of Arenal are famous too, offering a unique perspective on the forest combined with the sway of suspension bridges; some as long as 320 feet. For the whitewater rafter, Costa Rica is heaven. Warm waters, Class II, III and IV rapids and plenty of choices, among them the Pacuare in central Costa Rica and the Savegre near the Pacific coast.

ZIP HERE AND THERE

Perhaps zip-lining was invented here because of the glorious surroundings through which one zips. You’ll find numerous spots to experience this thrill during your Costa Rica tours. Speeds may reach fifty miles per hour. Some of the most popular areas to zipline are in the vicinity of Arenal Volcano National Park and the Monteverde Cloud Forest Reserve northwest of the capital in the country’s interior and on the coast in Manuel Antonio National Park and Marino Bellena National Park.

If your kids would love zip-lining, watching a volcano erupt, spotting tropical wildlife, crossing suspension bridges and swimming in warm waters, Costa Rica makes an unforgettable family vacation. You can’t be too young or too old to enjoy Costa Rica, a country as educational as it is fun. 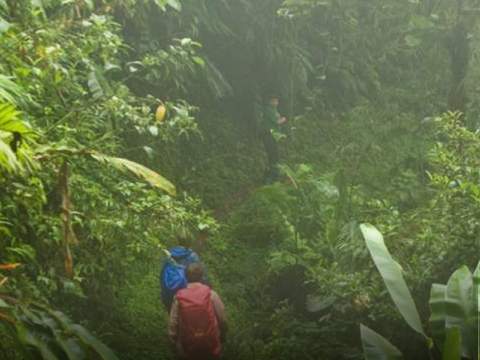 The Zip Lines of Costa Rica
Zip Lines are comprised of steel cables strung between two towers or trees, in segments of varying...

What Will Our Return to Travel Look Like?
What’s Happening in South America? Here’s What We Know Right Now
Be Here Now, Go South Later
Why Would You Vote For Us?
Is It Safe to Travel to Latin America?
The Weird Thing About History
Read All